Event! Merchandising, the UK’s leading supplier of sports merchandise, worked in partnership with British Lawn Tennis Association and were the official merchandise supplier to Team GB throughout their successful Davis Cup campaign, which included victories over U.S.A., France, Australia, and culminated in a stunning 3-1 victory over Belgium, in Ghent over the weekend of 27th-29th November 2015. Event! provided fans with merchandise throughout the Brits’ successful Davis Cup run, which the fans wore to showcase their support for the British team. This included the T-shirt manufactured by us with the slogan ‘Back the Brits’, and the frenzied wall of support that was generated from this was something which undoubtedly gave Team GB that push on their way to winning their first Davis Cup since 1936.

The Davis Cup, which Team GB had not won in 79 years, was first staged in 1900. It is an extremely prestigious tennis tournament and is commonly viewed as being the World Cup of tennis. In the 2015 version of the tournament, Great Britain memorably swept aside Belgium in the final in Ghent. Andy Murray confirmed his status as British sport’s golden boy at the frenzied cauldron of Flanders Expo, having joined a select band of players, in John McEnroe and Mats Wilander, in winning all eight of his Davis Cup rubbers in one tournament, on the way to Team GB’s final victory.

Let’s hope that the Event! ‘Back the Brits’ T-shirts provide a lasting memento of one of British sport’s finest hours. 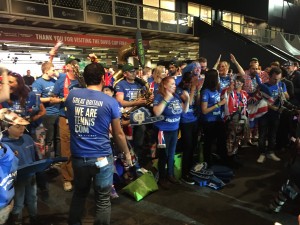 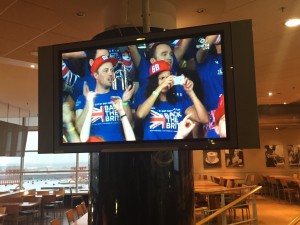 Fans really got into the spirit and supported Team GB all the way.